You are never too old to learn to ski

I always fancied learning to ski, and 2019 turned out to be the year to try.

At 48 though, was I too old? I was about to find out!Sitting on a flight from Gatwick, it dawned that I knew nothing about skiing. Literally zilch! This was going to be a steep, or more specifically a vertical learning curve for me.

Hotel Madeleine, in the centre of Obergurgl (a mountain village in the Austrian Tirol) was the weekend’s base. A wonderfully warm welcome was provided by the Familie Gastrein. They could not have done more to make us feel at home.

I must pause here to recall the unbelievably good food they served.  Truly mouth watering. I may have to dedicate a whole post just to Tirolean porridge!

Anyway back to the skiing.

The first hurdle was to put ski boots on and walk in them. Phew, no one told me that that in itself would be a full body workout. I arrived in time for my lesson whilst modelling my borrowed and hired ski gear. I was the epitome of the statement ‘all the gear and no idea’.

Traudl from Ski Schule Exclusiv  greeted me looking tanned, relaxed and athletic. The alpine air is obviously good for you. Without time to think, she had me up on my skis and put me through the basic drills at the bottom of the piste. Apparently I was good to go!

The next hurdle involved navigating ski lifts while juggling poles and skis as well as crossing ice in those ridiculous boots. It was becoming apparent that learning to ski was not just about grasping a technique. It was also adjusting to a new environment where everything felt alien.

So what about the skiing I hear you ask? 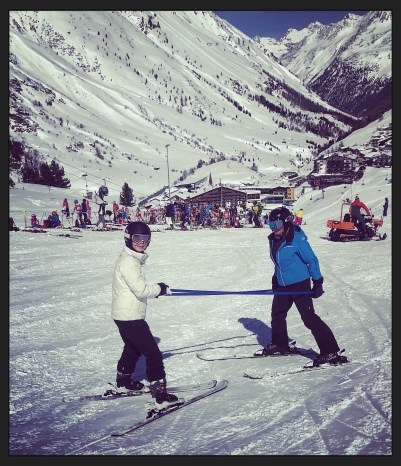 Traudl demonstrated infinite patience as she nursed me down from the middle station over and over again. I did not anticipate the level of fear I would feel when people shot up behind me before whipping past. It was like joining a motorway full of Porsches while I was in a Reliant Robin not knowing where the brakes were!

We persevered, and despite one descent where I tightly hugged Traudl all the way down, I started to ski. I even began to ‘feel the snow’.

My first taste of skiing has left me wanting more. Was I too old? Definitely not. Older, but not too old.

Obergurgl I will be back sooner rather than later I hope, and I will be braver next time I promise.

It’s been a week of watching and capturing light and shade. The morning rain on the patio table created a great abstract.
Dodged the rain when out with Ted, but it is making everything lush and green 😃
An idyll of calm and complete greenery found at Pashley Manor 💚
Last of this year’s bluebells still hanging on 💙
Lots of lambs on the South Downs to stop and watch during my morning runs 😍
Managed to pot up some plants at the weekend. Not sure they’ll be a patch on the ones at Pashley Manor, but looking forward to see how they develop 🌸
Ted seems to be saying,
Calm start to the week with a view over the Cuckmere Haven out to sea.
Hand portrait of the morning dog walk. Thanks @lillianspibey for the genre suggestion 👍🏼
Loading Comments...
%d bloggers like this: