To recap from my previous post, I had two groups of hens to integrate. Not as easy as it sounds, but it did teach me about group behaviour as well as this man called Kurt Lewin.

If you have not bumped into him before, let me introduce you with a few nuggets about the said man:
• Born to a Jewish family in 1890.
• His young life was lived in Germany.
• Psychology was his main area of study.
• He moved to America when Hitler came to power in 1933.
• Resolution of social conflict based on difference was his life’s work.

So, what is his Three Step Model of Change?

It uses the terms ‘unfreeze’ and ‘refreeze’. Disconcerting when I am talking about my pet poultry, and not to be confused with public health warnings at Christmas about thoroughly thawing your turkey!

In short, the model consists of:

Step One: Unfreezing
• Unlearning existing group arrangements.
• The group instigates its own change.
• This step causes emotional upset and anxiety.

Step Two: Change
• Group finds new acceptable behaviours.
• At this point the outcome of change is not known.
• The process is iterative (trial and error).

You may wonder how this represented the coming together of my two groups of hens.

Picking up the story from leaving the ‘Hen Lady of Leatherhead’. I headed home with my three newbies to introduce them to the two surviving girls.

Day one (Unfreeze) saw a lot of squawking and ruffled feathers. No hen knew how to behave and what their role in the newly formed group was. Dominance was shown by pecking and apparent bullying of the more timid. I stepped in once as it was hard to watch, but I did more harm than good. The bullying intensified as I tried to protect the quieter ones. I resisted and to let them find their own ground rules. 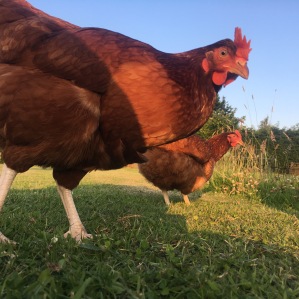 Day two (Change) was calmer, with the hens finding their position in the flock. The odd spat broke out if a hen tested the new hierarchy by grabbing food off the ‘leader’.

Day three (Refreeze) peace was reinstated. The girls were working effectively as a unit free ranging to find food, dust bathing and warning each other about the very scary heron. They really do not like the heron and sprint off like dinosaurs from Jurassic Park when it is in the vicinity!

Seeing these group dynamics play out up close, it is clear to me that there is a link between Lewin’s Model and chicken behaviour.

What about you? Have you seen any groups, human or not, who have behaved similarly?

Time for me to sign off. The next post which will be a whistle stop tour to Alfriston.

It’s been a week of watching and capturing light and shade. The morning rain on the patio table created a great abstract.
Dodged the rain when out with Ted, but it is making everything lush and green 😃
An idyll of calm and complete greenery found at Pashley Manor 💚
Last of this year’s bluebells still hanging on 💙
Lots of lambs on the South Downs to stop and watch during my morning runs 😍
Managed to pot up some plants at the weekend. Not sure they’ll be a patch on the ones at Pashley Manor, but looking forward to see how they develop 🌸
Ted seems to be saying,
Calm start to the week with a view over the Cuckmere Haven out to sea.
Hand portrait of the morning dog walk. Thanks @lillianspibey for the genre suggestion 👍🏼
Loading Comments...
%d bloggers like this: